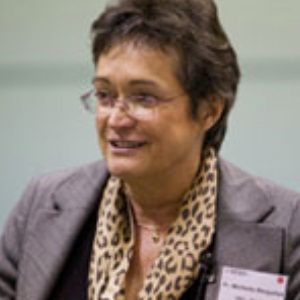 Michelle Bergadaà is a professor of marketing and communication at the University of Geneva since 1997. She obtained her PhD from the University of Montreal with her thesis on “The role of time in consumer action”. She was the recipient of the John A. Howard/American Marketing Association Doctoral Dissertation Recipient in 1988 (Best Dissertation Award in North America for the past 50 years). An article was derived from this and published in 1990 in The Journal of Consumer Research.

She has published over 100 articles in scientific journals. Her research has been based for 30 years on temporal organisation and for 8 years on giving and charitable practices. Her conceptual work deals with the ethics of proximity, identity and electronic communication. She is the author of several books, including Fonction Décideur (Les Éditions d’Organisation, 1997), Mutation de la société, Mutations des entreprises (Pearson International, 2009) and co-author of books such as Don et pratiques caritatives (de Boeck, coll. Études et recherches, 2011), Les savoirs du Web (de Boeck, coll. Le point sur, 2012) or Les temporalités du Web (2014).

Intrigued by the fact that the Web was revolutionizing knowledge and the exponential nature of academic plagiarism, in 2004 she created the collaborative site “Responsable”, which today has more than 22,000 subscribers from 117 higher education institutions in 17 countries. Combining her skills as an educator and researcher, she has implemented an international action research project on academic plagiarism via the Internet. Her work has been widely covered by the media in Switzerland (TSR, RSR, newspapers) and internationally. Since 2010, she has published several scientific articles on this topic. Since 2004, she has been disseminating her research work via the Web to facilitate access to the many actors involved in the reflection on scientific integrity.

Since 2000, she has directed the Observatoire des stratégies de marketing et de vente (OVSM) in Geneva, which brings together executives from fifteen major companies (Piaget Group, Aéroport Genèva, HP, Procter & Gamble, Caterpillar, Nestlé, etc.). The aim of this organization is to strengthen relations between the business world and the academic world.